Is there some confusion about whether or not paper towels can be composted?

Is it ever okay to compost something that isn’t food?

Can you compost paper towels at all?

Are there some types that can’t be composted?

Some people may not believe paper towels can be composted. This is often because paper towels may be bleached or treated with chemicals, and some individuals believe these chemicals don’t belong in the compost bin.

However, it is entirely possible to compost paper towels safely and effectively. All you have to do is learn how!

In this can you compost paper towels article, we’ll show you some information about how to compost most types of paper towels and which ones you should avoid adding to the pile. You’ll learn the best way to use paper towels when composting, so read on!

JUMP TO A SECTION:

All About Composting Paper Towels

In this section, we’ll teach you the paper towel compost basics and help you get started with adding paper towels to your compost pile. Check out the information below to find out everything you want to know and more about composting your paper towels:

How are paper towels composted?

What kinds of paper towels can you compost safely?

What kinds should you never compost?

What are some issues you might encounter when composting paper towels?

How can you troubleshoot these problems?

Now that you know how to handle paper towel composting, it’s time to see just what it can do for you. There are some upsides of composting your paper towels that you may not have realized, so it’s important to brush up on these before choosing to go this route with your own composting bin.

Here are a few benefits you may enjoy from composting paper towels:

We routinely do our best to follow our editorial practices and policies throughout our website. This includes investigating every one of our blog posts meticulously and constantly doing our utmost best to provide the most accurate information and facts possible for our site visitors. You can visit our About Us Page for more info. 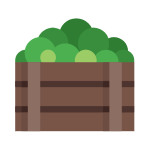 CompostObsession.com is obsessed with offering you some of the finest composting content from across the net!

We’ve taken care of all the researching and curating just for YOU: the puzzled, future compost enthusiast who could definitely use a superb website to help launch your very own composting obsession!

Indulge in all the composting posts you can handle on CompostObsession.com. Thanks for exploring our site and please do share us with your friends and loved ones. We legitimately hope you’re able to start up your own composting obsession today!

Thank you for visiting CompostObsession! When you purchase something via our site links, we may receive an affiliate commission at no additional cost to you. Please enjoy our website!